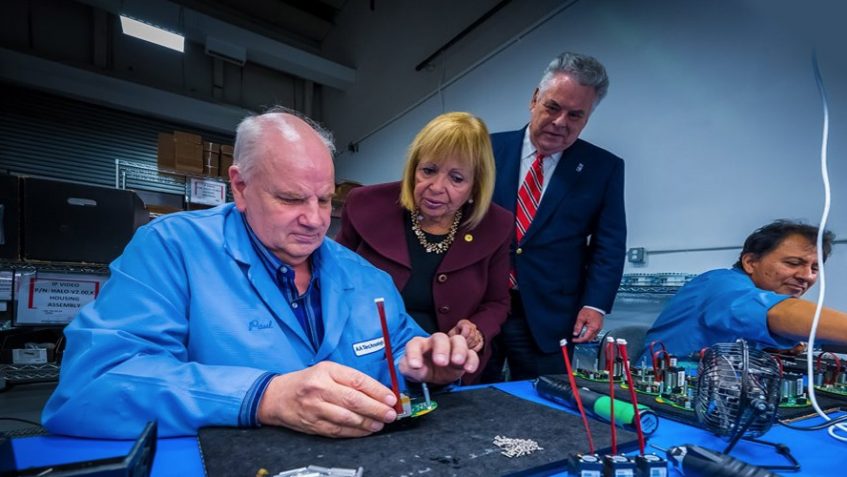 The officials gathered on the heels of the first reported vaping-related death in New York State Tuesday, October 8th, of a 17 year-old Bronx boy, and just days after Governor Cuomo’s call to ban flavored e-cigarettes in New York State. Last week, 1,000 new cases of vaping related illnesses were reported to the Centers for Disease Control.

”It’s gratifying to see that Governor Cuomo has taken a stand to ban flavored e-cigarettes in the State of New York,” said Islip Supervisor Angie Carpenter. “Once the ban on flavored e-cigarettes takes effect, Town of Islip Fire Marshals will be monitoring compliance during routine inspections throughout the Town. Back in May of 2016, I initiated changes to our Town Code to prohibit vape shops from locating near schools, parks, playgrounds and places of worship. Recently, this section of the Code was tested in Court and has been upheld. Our Fire Marshals remain prepared to respond to any complaints we receive, and to help ensure that flavored e-cigarettes do not reach the youth in our communities,” said Islip Supervisor Angie Carpenter.

“It’s considered ordinary recreation, and it’s also considered cool,” said Rep. Peter King. “We have to stop this. I really blame the companies like Juul and others, for the enticement of young people into vaping through various flavors. It’s just to draw kids in, and in many ways they’re using the same advertising methods that the tobacco companies used 30 and 40 years ago to entice adults into smoking,” he added.

Rep. Peter King is an original cosponsor of the QUITS Act (Rep. Suozzi), which would triple the federal tax on cigarettes, cigars, pipe tobacco, smokeless tobacco and roll-your -own tobacco, ban all flavors of tobacco including menthol in tobacco and e-cigarettes and double the annual budget for the CDC’s Office on Smoking and Health.

MaryAnn Pfeiffer, Co-Chair of the Town of Islip Opioid/Heroin Task Force said, “We had just been experiencing a substantial decline in teen tobacco smoking and BAM, vaping comes along and we’re back to square one.”