Community Turns Out for Veteran’s Homecoming 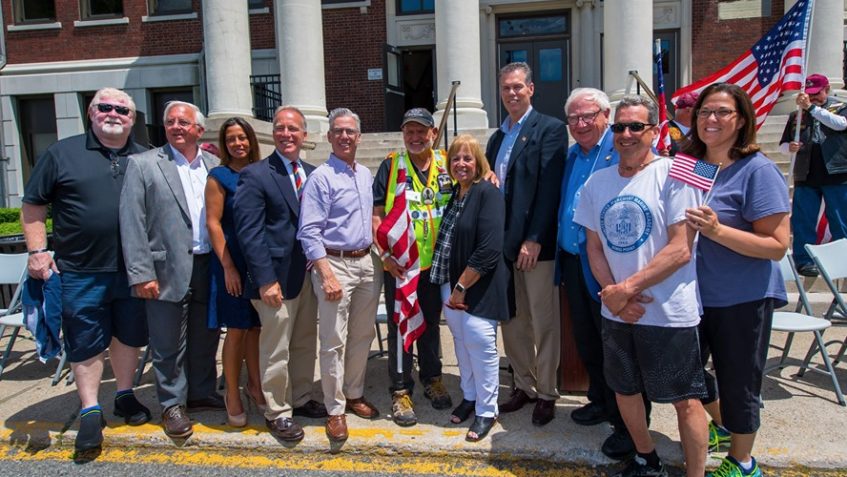 Life-long Town of Islip resident and veterans’ advocate Frank Romeo completed the final leg of his intrepid 750 mile walk across New York State Saturday, shedding light on veterans issues and awareness of PTSD. Romeo began his walk in late winter and culminated at the Veterans’ Memorial Head of the Brightwaters Canal, where he was greeted by family, friends, supporters and local elected officials.

On March 1st, 2019, at the age of 70, decorated Vietnam Veteran Frank, who is one of the longest living veterans diagnosed with 100% Post-Traumatic Stress Disorder (PTSD) related disabilities, began a 750-mile trek across the State of New York, advocating for veterans issues and the awareness of PTSD, suicide and homelessness.

Frank and his supporters walked through sub-zero temperatures, 85 mph winds, rain, sleet and snow, traversing bridges, tunnels and countless roads on his journey across 25 NY counties. Frank began in Buffalo, NY and visited veteran homeless shelters, outreach centers and facilities, speaking with veterans about his own fifty-year battle with PTSD and educating the public on the realities of war.

Frank was joined by family, friends and supporters who all walked the final leg of his journey from Brightwaters Canal to Bay Shore High School alongside him for a community homecoming.

“Frank Romeo is a devoted veterans’ advocate, whose commitment to veterans’ affairs is unparalleled,” said Supervisor Carpenter. “We congratulate him on this outstanding accomplishment,” she added.