Angie M. Carpenter is a public servant whose impact resonates well beyond her role as Islip Town Supervisor. Since being elected to the Suffolk 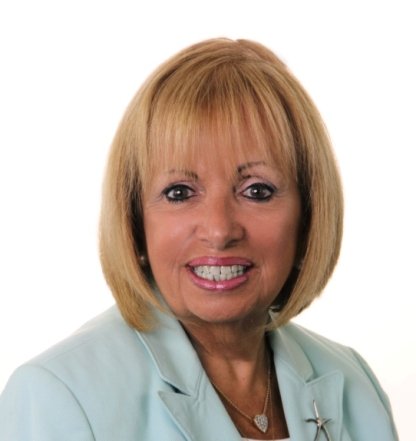 County Legislature in 1993, she served on almost every legislative committee, where her leadership generated county-wide initiatives in public safety, education, economic development, consumer protection and cultural affairs. She was elected unanimously to serve as the Legislature’s Deputy Presiding Officer for 2 consecutive years.

Angie’s experience owning a business was invaluable in helping to draft the County’s annual $2+ billion budget during her years in County Government. She worked to bring the Touro School of Health Sciences to downtown Bay Shore, and worked tirelessly to increase aid to Suffolk Community College. She continues her role as an avid supporter of the college, and worked from the beginning to see the construction of the $54 million-dollar Health and Technology building at the Western Campus, the fastest growing campus of the college.

She helped implement a mass transportation public information program, enacted a Linked Deposit Program to promote local business expansion, and directed the County Health Department to provide free testing for prostate cancer, and worked closely with the local breast cancer coalitions. She was instrumental in the preservation of historic Sagtikos Manor in Bay Shore, providing a blueprint for the
way to help preserve Long Island’s past for its future.

In November of 2005, Angie was elected by the voters in Suffolk County to serve as the County Treasurer, garnering the support of the majority of voters in each of the County’s ten towns. Since taking office in January 2006, she has aggressively worked to increase interest earnings with all designated depositories, recommended changes to the State’s Real Property Tax Law, is currently working to enable taxpayers to pay delinquent property taxes through a web pay portal using their credit cards.

In November of 2014, Angie was re-elected by the voters in Suffolk County to continue her service as the County Treasurer. As a dedicated public official she continues to provide the residents of Suffolk County with assistance in these difficult economic times. Every effort is made for residents to access valuable information which may serve them in a positive way.

In March of 2015, Angie was appointed the serve out the vacated term of Islip Town Supervisor. Upon taking office she convened a task force to review the town budget. These experts found the budget very difficult to understand. The recommendation that came out of this review is that future budgets need to more accessible so the ordinary citizens can easily see how their tax dollars are being spent. The 2016 Budget will look very different from all previous budgets, instead of only rows of meaningless numbers, there will be narratives for each department describing its function, this will provide a necessary baseline for future accountability.

Named to Who’s Who in America, 25th Silver Anniversary Edition of Who’s Who in the World, World Who’s Who of Women, Who’s Who of American Women, Strathmore’s Who’s Who Worldwide Edition, and 2007 recipient of the NYWEA Frank E. Van Lare Award environmental award for an elected official, and named to the National Women’s Hall of Fame, 2009. She has been recognized locally with many honors; including Suffolk County Community College President’s Award for Exemplary Service for her contributions to the college, and LIBN Top 50 Women. Angie continues to volunteer her time and presently serves as the Chair of the CHS Continuing Care Board overseeing Our Lady of Consolation, Maryhaven, Good Shepherd Hospice and CHS Homecare. She has shared her expertise with many organizations including the Chamber Council of Islip Town, West Islip Chamber of Commerce, Vanderbilt Museum, Our Lady of Consolation Geriatric Care Center, West Islip Breast Cancer Coalition and the Salvation Army, to name a few.

Past experience as a small business owner proved invaluable in helping to draft the County’s annual $2+ billion budget during nearly 13 years in the Suffolk County Legislature. Worked to bring the Touro School of Health Sciences to downtown Bay Shore, and worked tirelessly to increase aid to Suffolk County Community College. Continuing as an avid supporter of the college, worked from the beginning to see the construction of the $54 million-dollar Health & Technology building at the Western Campus, the fastest growing campus of the college. Helped implement a mass transportation public information program, enacted a Linked Deposit Program to promote local business expansion. Instrumental in the preservation of historic Sagtikos Manor in Bay Shore, providing a blueprint for the way to help preserve Long Island’s past for its future.

March 2015 to Present
On March 1st 2015 Angie Carpenter was sworn in as the first woman Supervisor of the Town of Islip in its more than 300 year history, to fill the vacancy of Islip Town Supervisor, created when Tom Croci was elected to the New York State Senate. She brings more than twenty years of government experience, coupled with her extensive financial knowledge, and was thrilled to come home to Islip and work to improve the community she loves so much. As expected, Angie hit the ground running embracing the challenges and working on new ideas to make Islip an ever greater town for people to do business, raise a family, and enjoy the many wonderful amenities.

In November 2015, Angie was elected by the residents of the Town to serve four more years as the Islip Town Supervisor. Angie will continue to engage residents to work together to revitalize the airport, promote business, and increase efforts to ensure that the needs of all Islip residents are met in a cost effective, and compassionate manner.

January 2006 to present
In November of 2005, elected by the voters in Suffolk County to serve as the County Treasurer, garnering the support of the majority of voters in each of the County’s ten towns. Since taking office in January 2006, aggressively worked to increase interest earnings with all designated depositories, recommended changes to the State’s Real Property Tax Law; currently working to enable taxpayers to pay delinquent property taxes through a web pay portal using their credit cards. Re-elected in November 2009 having run with the endorsement of all major political parties.

February 1993 to Dec. 31, 2005
Elected in February of 1993 to fill an unexpired term. Served on almost every legislative committee, where her leadership generated county-wide initiatives in public safety, education, economic development, consumer protection and cultural affairs. Elected unanimously to serve as the Legislature’s Deputy Presiding Office for 2 consecutives years.

West Islip Record
Monthly tabloid newspaper began in 1986 dedicated to the needs of the local community until the early 90’s.

Office Manager, Copy Editor, Graphic Designer, Typographer 1966-1976 Maverick Publications and Merrick Typographers
Began in 1966 as a typesetting trainee and through on-the-job opportunities became proficient in many phases of graphics and publishing, ultimately supervising the department.

COMMUNITY SERVICE
CHAIRPERSON/TRUSTEE
CHS CONTINUING CARE BOARD 2006 to present
Serve as the volunteer chairperson of the CHS (Catholic Health Services of L.I.) Continuing Care Board which is the overall governing board of Consolation, Maryhaven, Good Shepherd Hospice and CHS Home Health Care in Suffolk and Nassau Counties.

BOARD CHAIR/MEMBER
Consolation Residence Geriatric Care Center, West Islip 1992-2006
A 200+ bed skilled nursing facility for the aged. In summer of ’97 an additional 200 beds were included in the expansion for sub-acute care for non-geriatric patient needs. Served as chair of the community relations committee, assisting with many fundraising efforts
including annual Celebration of Life Ball, Yuletide Dinner Dance Capital Campaign and Golf Outing.

ANGIE CARPENTER TRUSTEE
Suffolk County Vanderbilt Museum 1990 to 1993
Chairperson of the Public Relations and Development Committee and member of the Executive Board, Nominating, Finance, and Buildings and Grounds Committee. Part of the Task force responsible for bringing laser shows to planetarium

FOUNDER and PRESIDENT 1988 to 1994
Chamber Council of Islip Town Organized this town-wide coalition to address the needs of small business in the Town, providing a liaison with local and state government on issues pertinent to the business
community.

ADVISORY BOARD MEMBER 1991 to present
Suffolk County Salvation Army Participate as a member of the annual Golf Outing Committee since the late 80’s. Volunteer in many areas including participating in annual holiday Angel-Tree Program.
Past Board Chair, member of the Executive, Public Relations and Nominating Committees.
PRESIDENT 1982 to present
West Islip Chamber of Commerce
Working closely with government, have tried to keep this alliance of merchants, residents and community groups devoted to improving the quality of life in the community and continued success of the business community in the hamlet. Working with State was able to secure “West Islip” signs on the parkways where none ever existed. Served as vice president of merchants, government/community liaison and president for four years. Helped initiate and run golf outing from 1984 to 1990. In 1991 developed the Annual Business Expo to focus to community’s businesses and service organizations with nearly 1,000 in attendance. Helped develop a “Shadow Day” program giving young people an opportunity to work for a day with various businesses including the school district and Good Samaritan Hospital.

FOUNDING BOARD MEMBER 1985 to 1993
Y.E.S. (Youth Enrichment Services)
Working behind the scenes, helped form a board of directors and establish not-for-profit corporation for this youth agency. Also served as vice president and corporate secretary and helped to establish and revitalize programs for the youth in our hamlet. Working
with town, county and state officials helped to secure additional funding and establish a Youth Drop-in-Lounge. This organization has continued to grow serving the youth needs of West Islip, Bay Shore, Brentwood and Central Islip. Helped form ASK US (After School Kids Under Supervision), a before and after-school program. West Islip Substance Abuse Task Force 1994 to present Serve on this coalition of school administrators, PTA members, youth service providers
to address the concerns of substance abuse. As a means of outreach, sponsors an Annual Fun/Run that sees nearly 600 parents, children and community members participating. Served as moderator for panel discussion to answer community concerns and help educate the community to the issue.

CHAIRPERSON 1987 to 1990
Supervisor’s Blue Ribbon Cte. On Commercial Recycling
At the request of the Town Supervisor served on this panel to study the means and the impact of recycling on Islip’s businesses. In January of 1988 phase-in of corrugated recycling was begun.

CHAIRPERSON 1990 to 1993
Town of Islip Housing Authority
Volunteer position on Town’s agency for subsidized housing and senior citizen housing in the Town of Islip. Also Served as the Board Chair.

MEMBER
Town of Islip Census Committee
Volunteer member of committee to help build awareness and participation by local residents in the 1990 census.

CONSULTANT 1989
New York State Job Development Worked on the development and presentation of a seminar on Proofreading and Quality Control for a large commercial printing Corporation as a subcontractor for Boces III.

MEMBER
Long Island Association (LIA). Active participant in LIA’s
Government Action Council, CLOUT, and New Long Island Economic Partnership Good Samaritan and Southside Hospitals. Work closely with the hospitals on a number of initiatives. Served as participating member of the Annual Women’s Dinner for the Breast Health Center and member of the annual Balls. Offered assistance in the establishment of the West Islip Breast Cancer Coalition encouraging Good Samaritan to partner with the coalition to distribute the breast cancer survey to the community. Also assisted Southside Hospital with the townwide breast cancer study. “KNOW YOUR TOWN” service presentation made at the request of the Small Business Development Center at SUNY Stony Brook for Home-Based Business Workshop in 1989 and 1991.

COMMITTEE MEMBER
Citizen’s Review Board
Served as a member of Congressman Downey’s screening committee for service academy appointments in 1985 and 1986 interviewing high school seniors. Developed a form to expedite and better organize the process.